After checking out London Betty’s house, with my black marbled composition book full of notes, I went back to the furniture and design store where I worked. We carried very traditional, mid-high to high-end furnishings. A  sea foam green, Naugahyde recliner was not something that we sold. We also had a strict policy of not buying anything from any other stores to complete our designs.We would push our product as an only option.  I had never crossed that line and taken anyone shopping. I always convinced  the customers that our product was the best choice. I was dutiful and up until that moment, a team player. But now, I looked around the chintz and passementerie and knew I was about to break some rules. 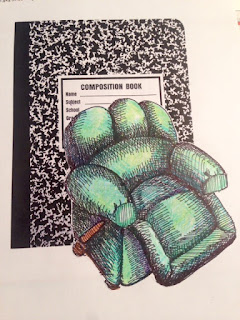 London Betty’sjob was really the straw that broke the camel’s back with me. I was working long hours and the commitment to my job was apparent to the customers who often asked me if I was the owner. I was certainly not the owner, I was an underpaid laborer, making a draw with a very small commission. I was a good decorator and a better sales person. I had just sold more than any other salesperson in any of their stores the previous month, but never got even as much as a pat on the back. I wasn’t going to let rules get in my way anymore....if ever there was a time to break the rules, the time was now!
The days at the store were long. Some days felt like ten
extra hours had been tacked on after lunch. One day I received a phone call from a woman who was looking for a $5 piece of drapery hardware. I said I would put it to the side for her and she said she would pick it up before we closed at 5:30. The day just dragged and I was in charge of closing up the store and locking it. With only one other salesperson there, I made the executive decision to close early. My shoes were already off, I counted up and locked the register, and then I went to each door and locked them as well. As I locked the door nearest to the front window, I saw a woman pull into the parking space directly in front of the shop. It was the $5 sale...it was my 30 cents commission....I should have opened the door.
I didn’t open it....i yelled to the other saleswoman in the store, “Duck!!! Hide!!!” I have no idea what she thought, but she complied immediately and threw herself behind a chair in one of the vignettes. I ran and hid next to her saying, “I am NOT reopening the store,  I'm going home as soon as she leaves!!” The other salesperson seemed simultaneously both horrified and hysterical. She couldn't believe two grown women were hiding behind a chair while a customer was hammering
furiously on the door. I felt the need to cover her mouth so that her laughter wouldn't be heard, but controlled myself from do that. We sat there for what seemed an eternity, then like a dough boy peeking out of a foxhole, I slowly checked from behind a cushion to see if she was still there. RAT-A-TAT-TAT.... she fired at us...banging and incensed... shouting, “I SEE YOU!!!!”
There was no way I was getting up now...what would I say? “Oh, did you want to come in?? I’m so sorry...I always crouch on the floor behind chairs and sofas....puhhhleeeeze, come right in!”
So there we two stayed until we felt that the coast was clear. We both carefully crept from chair to chair as if we were dodging bullets...but she was gone ...we were able to get to the back room and out the door to the alley.
The next morning, to no one’s great surprise I was fired...I took my black marbled composition book and called my customers. First call was to London Betty, we had sea foam green Naugahyde recliners to buy!