Tuesday March 11th  1986-
Mark hailed a cab and I followed him into the car with my pink blanketed package. Mark told the cabbie, “West End Ave and 75th Street”, and sat back in his seat. We looked at each other and at this baby . We couldn’t have been more nervous. What had we done? There were no “backsies’ here, we were committed. The driver asked us her name and we said Leah. The driver then started telling us the story from the bible. Leah was the unwanted less attractive sister, the one that the father had to marry off by trickery. Learning that our very first act as parents was giving our daughter a name of an unwanted bride seemed like a bad start. But we looked at this sweet beautiful baby and were smitten. Our world had changed forever.

Friday March 7th  1986 -
After nine long months of pregnancy, I was approaching the finish line. I never had a bout of true morning sickness, but I did have a feeling of being slightly carsick the entire time. Constant bland soothing foods were the only thing that seemed to quell the nausea, so I ate pasta and milkshakes until I had accomplished gaining 60 lbs. I had grown so large, when sitting alone in the apartment on the floor, putting together the pieces of a baby-swing I couldn’t get myself off the ground. Like a walrus on a rock, I could only flop about, waiting for Mark to get home and help me up off the floor

With my due date quickly approaching, the timing of our blessed event seemed to conflict with Mark’s college basketball viewing. The baby’s arrival was inconveniently anticipated smack in the middle of The Big East Conference Tournament. Had we only counted better during conception, there would have been a coitus timeout called on the court to make sure this tragic overlap didn’t occur. Now it was too late for finger pointing and anger, it was just something we would have to soldier through.

Mark, working at Sports Illustrated had tickets for the game in the in the luxury Sky Box at Madison Square Garden. These were the dark ages before cell phones. The times you were away from home, or out of the office was time that you were actually unreachable. With this in mind, Mark considerately called me before he left his desk at work, he let me know that he was on his way to the game and wanted make sure I wasn’t stranded on the floor like the week before.

I told him that I was feeling fine and said the requisite “Lets Go Orange”. I told him to have fun, so, in retrospect, the events that follow could certainly be blamed on me.

We lived in a relatively small apartment building on West End Ave , 8 floors with only 2, 3 or 4 apts on each floor.  There was the usual mix of tenants, the Puerto Rican super in the basement apartment, the foreign diplomat with live in help from her country (that we suspected was chained to the radiator at night), the well known Broadway singer who was the dubbed voice of all the singing movie stars, bankers, lawyers and of course the crazy lady who let the pigeons fly into and stay in her apt, she wore white pancake makeup, round circles of rouge, and bright red lipstick reaching inches passed her lip line. In this building we had a group of young married couples, all within a year or 2 of each other in age. We were not people who would seek each other out in the real world, but like a college dormitory, because we lived together, we became a clique. We all got pregnant within months of each other. I was last to get pregnant and would seek their advice since they were all a few months ahead of me.

That Friday afternoon, my neighbor took photos of me in a bikini, saying that as soon as she did this, it brought on her labor. We laughed at the sight of me in that pink bikini and watched the baby’s fist or heel make a path across my belly, looking like the sand worms in the movie Dune.

With Mark gone for the evening, I was looking forward to watching “Bye Bye Birdie” on TV. I settled in on the sofa and couldn’t get comfortable. Pretty much, as soon as Ann-Margaret finished singing her opening number, I knew that I was in the early stages of labor.

Mark had found an empty payphone during a timeout. He thoughtfully called to check up on me. I knew it was still early labor and he was thrilled that he was watching his Orangemen playing like real champions, so I chose not to say what was brewing. He would have come home if I had said I was starting labor. I heard the excitement in his voice telling me about his team and I knew the game would be over soon.

And....this is where our communication skills break down. I assumed saying that I was fine was a selfless deed. I know the length of a basketball game and felt sure he would be coming in the door in about an hour. He heard, “ go – have fun- this will be one of the last times you can throw caution to the wind with the guys”....so, after the Syracuse game was over Mark chose to stay for the 2nd game of the tournament . He thought since it was  a night of victory and last chances. He thought it was the perfect night to get drunker than he had ever been had before.

With no way to call him, I paced and paced as the pain of labor kept coming and going. Hours passed, Hugo and Kim were reunited and the credits and music were long over. With each contraction I stared in disbelief at the door, burning a hole through it. Imaging Mark in an accident that I was hoping caused him multiple contusions. And then...  the door opened, Mark stumbled in like a man made of jello, but with the stale stinking aroma of beers, hotdogs and testosterone. With lidded eyes barely open, he tried to focus on me, standing in the hallway. I was screeching with a sound so insane it’s a wonder swat teams weren’t sent to secure our block.

Mark went to sleep and I paced the apt like a caged convict, making noises that I hoped would wake him, but nothing was going to rouse him. Around 9am he shuffled to the bathroom and saw me circling the apartment. He asked what I was doing? I answered “Im Having the BABY!!” He looked at me knowing that his only chance of living now meant total and complete resignation. He dressed and we went to the Dr’s office.

The Doctor, seemingly in a conspiracy with Mark, told me I was barely dilated and should go home. I was sure I saw a wink pass between them or even a quick high five, as we left and Mark was able to go back to sleep.

Late that afternoon we spoke to the Dr and he told us to come to the hospital. Even then, I was nowhere near ready, but in a sympathetic gesture to me and to Mark, he gave drugs to calm me down and an epidural to stop the pain.

Because of the epidural, I couldn’t feel the contractions. We just watched them on the monitor...or should I say I watched them.. Syracuse was back on the court Saturday night and the birth of a child was not going to get in the way. Mark had on his Sony Walkman radio with the big foam circle headset. He cheered and groaned as I lay there. Then after 36 hours of labor and basketball, on the very first push in the delivery room, my beautiful baby was born.

She was perfect. Nearly 10 lbs, the largest baby in the nursery but the numbers were still not adding up to my 60 lb weight gain. But weight issues are worthy of its own chapter, so we will leave with the miraculous feeling of being handed my baby, my Leah. All the joys of the world put on top of my chest. Holding the tiny pink fingers and putting my nose almost in her mouth to breathe in her breath, as if it was all the air I had never breathed before. 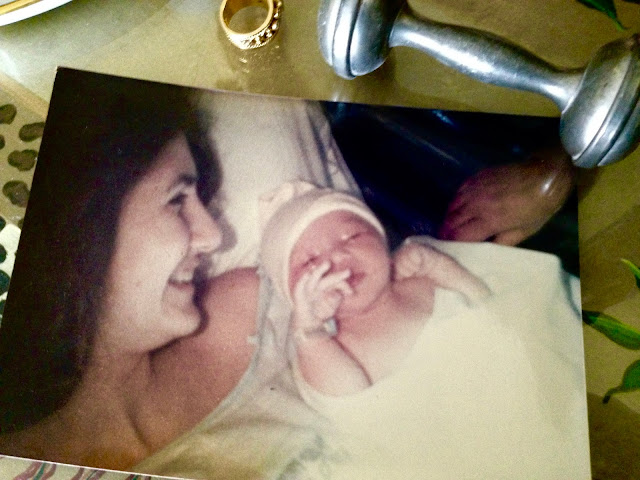 Tuesday March 11th 1986- out of the cab, into our apartment and the beginning of our new life.
Posted by Ruth Kabat Thomas at 2:36 PM 1 comment: