My Glory Days In The Glamorous World of Publishing

When I completed college, I got the job of my dreams.  I snagged a position in the art department at "National Lampoon". Nothing could've been more thrilling. The job at Lampoon was for a series of special projects and when they were done so was my position. (the time I spent there certainly deserves its own post, but for now, this is about what came after)  Reluctantly I needed to find a new job and found one at a magazine that could not have been any more different, "Financial World". Gone were the people in tee shirts and ripped jeans, gone was the explosive laughter, gone were the suspicious smells coming from closed doors.
The staff at "Financial World" was all male, with the exception of the secretaries and another art staffer. They were strictly a dark suit, white shirt humorless crowd, who in 1978, were still talking to and about the women on the staff like we were in an episode of Madmen. The Art Director, John, was a balding man with a combover and appeared as if he had just read "Dress Cool Like The Kids". I could just imagine him, back home on the weekends, telling his neighbors about being an "artist" in Manhattan while wowing them with his hip fondue dinners.
The other woman in the art department, April, was very cool.  She had long straight hair, was as thin as a rail and always dressed in black. She was extremely good at her job and kept very quiet. We kept the door shut to our office and would play music. She had been there for a couple of years and I could feel, although she never said it, that she would be gone soon. One morning she announced that she was leaving to work at "Rolling Stone". As soon as she announced that she was giving her two weeks notice, she became chatty. She told me of the parade of other assistants that left this room. She said that John only hired women for this job. She said that he hit on everyone of them. April said one of the former assistants and he were still meeting at a hotel at lunchtime. She told me about John's very sweet wife who was a board artist and often came in to work at crunch times when we were closing issues. April told me that his wife was seemingly unaware. Being pretty naive, I assumed his attention that he gave me was the fatherly kind. It never occurred to me that the man with the pressed blue jeans and neckerchief, tied jauntily to the side, was mentally undressing me.
After April went to "Rolling Stone", my duties in the art dept grew. I had more responsibilities and no one standing over me to check my work. John, who had hired me because I was an attractive girl, clearly didn't check my references from "National Lampoon". I went to Lampoon with no experience and little knowledge of board work. Most of the copy that I pasted onto the boards was crooked. Skip Johnston, at Lampoon, told me I was hands down the worst mechanical artist he had ever hired at the magazine. Always being a person who appreciates superlatives, I was proud of being "worst". This being said, when I was finally on my own at "Financial World", mistakes were bound to happen.
I don't know where John was when we did the cover of an important issue about the bull market, but I was given the task of doing it. I went through stock photos of animals and found a horned beast worthy of the cover. I got the last minute headlines sent to the typesetter and picked the colors. I felt like a pro...I thought even Skip would be proud of how far I had come in such a short time. There was  no one checking my work... I was the last stop before the printer got the boards.
The morning that the issue hit newsstands, phone calls started coming in. There was a problem. The issue about the strong bull market, with a bull staring out from the cover with the headline "Is It For Real" had one glaring mistake for anyone familiar with animals...it was a cow...Not a BULL! How was I to know that horns are not just on bulls? I wish I could remember the conversations being screamed in the halls, but the blame, (although my mistake) was John's. He should never have had this go to press without his OK. 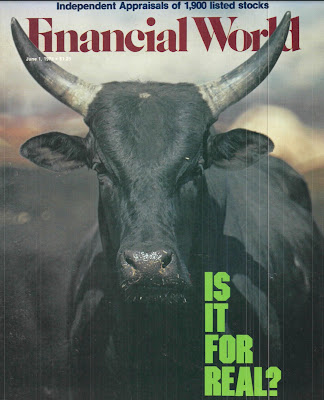 In a small bowl, coat the cheeses with cornstarch and set aside. Rub the inside of the ceramic fondue pot with the garlic, then discard.
Over medium heat, add the wine and lemon juice and bring to a gentle simmer. Gradually stir the cheese into the simmering liquid. Melting the cheese gradually encourages a smooth fondue. Once smooth, stir in cherry brandy, mustard and nutmeg.
Arrange an assortment of bite-sized dipping foods on a lazy Susan around fondue pot. Serve with chunks of French and pumpernickel breads. Some other suggestions are Granny Smith apples and blanched vegetables such as broccoli, cauliflower, carrots and asparagus. Spear with fondue forks or wooden skewers, dip, swirl and enjoy!

Posted by Ruth Kabat Thomas at 7:28 AM No comments: