MY MOM'S DAY OUT 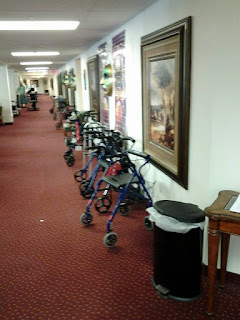 My mom was living alone in the house that she had lived in for nearly half of a century. It was by no means a grand house standing alone on a hill. It was a one floor ranch house in a neighborhood with houses just two driveway widths away from each other. But when she turned 80, it was like a switch was flipped. My mom became old, and this house was too hard for her to navigate.  She had a few falls, and with bones made of dust, the time had come to move her into a "Home".
The story of moving her into Abbotswood is a long one for another time...lets just jump to her having lived there for about five years. By this time she was the Queen of this independent living community. She knew everyone, the staff loved her, a few men wooed her, she starred in the plays, and with an iron fist, she called the numbers at Bingo.
She was physically a different woman from the one i grew up with. For her entire life, weight was her enemy. She was always heavy. BUT, she was always pulled together. Her long black hair was in a  neat tight bun and her lipstick was always reapplied.  She was also strong. If you wanted a jar opened, you never gave it to my father. It was my mother with the strength. By her 85th birthday, all of that was now a memory. She was a slight, weak woman who could not walk very far and had to use a walker.
My mom did not let her infirmities stop her. She never complained. The doctors would look at her x-rays and tests and marvel at her great disposition and tolerance for pain. Whenever you asked her how she was doing, she always replied, "Fine!" ....and not in the Jewish mother, guilt way of, "im fine...don't worry about me ....ill just sit alone in the corner"...she meant it.
One afternoon, my mother was invited to a large luncheon and canasta party to be hosted at a hotel. She had her hair done, she "put on her face", she pulled out one of her St Johns knit suits.(she single-handedly kept St Johns in business)- one of the few concessions that she had to make in her 80's was buying flats. She had ALWAYS worn heels. (My sister and i had to actually take them away from her after one of her many falls. It was a black day on her calendar.)
The independent living center had a bus service and a few people who drove in cars. My mom had a driver that took her everywhere. He took her to the hotel and brought to the front door. She waved him off and said she would be fine from there. Mom went to the front desk and was told the luncheon was in a conference room on another floor and on the opposite side of the building. Turning her walker, off she went from the very large lobby and down the long hallways to the elevators. She didn't know everyone who would be coming but rightly assumed she would run into others going to the function. Sure enough, out of the corner of her eye she saw another older woman walking to the elevators.
My mother was a kind, friendly woman, but she was not one to just start up a conversation with a stranger. She was also opinionated and a bit judgey. She turned and smiled at the woman and saw her smiling back at her, but the woman didnt start any exchange, so neither did my mom. Down one hallway and then another, mom maneuvered her walker at a snail's pace. The other lady never passed her. As mom glanced at her she noticed the outfit the lady was wearing and took a mental note of her obvious good taste, wearing something she thought she would certainly pick out for herself. She also noted the scowl that this woman gave to my mother.
Finally, they arrived at the elevator doors and as the doors opened, the woman disappeared. The hallways were all mirrored and that smartly dressed scowling woman was her reflection.
When she got to the luncheon, my mother was hysterical laughing and also very happy that she had selected such a great looking ensemble for the day.
------------------------------------------------------------------------------------------------------------------------

5 lbs of Brisket
2 onions chopped
1 bag of baby carrots
1 pkg Lipton onion soup mix
1 28 oz can San Marzano tomatoes
1/2 c dark brown sugar
1 16 oz can cranberry sauce
3/4 c red wine
----
put just enough olive oil to cover bottom of dutch oven -sear meat on both sides -fat side down then ending with fat side up....combine all the other ingredients.... pour over meat and cover tightly... put in a 350* oven....cook for 40 minutes....take out meat and slice while still tough....put meat back in tightly cover pan.... lower temp to 300 and cook for 2 1/2 hours....uncover, cook another 30 minutes