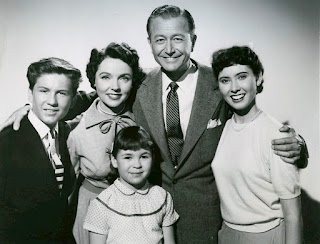 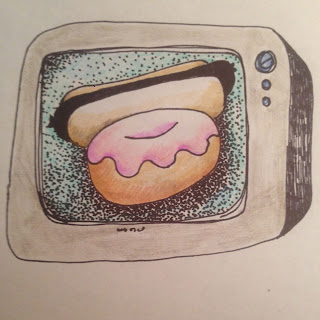 i have always been a TV addict-
i cant help it...it doesn't matter what is on, i will watch it-
it doesn't matter what is happening around me...please move, you are blocking the TV...
On August 20th 1979 I had a terrible stomachache and left work early. Mark and I lived in a runned down apt on 110th St and Amsterdam Ave. We didn't have air conditioning, but we did have an  enormous window with a view of St John the Divine. When i got home, i opened the windows and stripped down to my underwear. An unairconditioned apt in NYC ,in late August, is not a place for clothing. I got a pillow and made myself comfortable on the sofa, then turned on our little black and white tv. Lucky for me "Father Knows Best" was on, so i had some serious viewing to keep my mind off my pain.
Mark came home and said he called my office and heard that i left early. He said "let's go out to dinner" and suggested an expensive restaurant. I said, "Are you Crazy?!?We cant afford to go there!!" Then he said that we should splurge. I said , "i have a stomachache ...and be quiet, I'm watching this show"
----at this point Bud and Betty's friends were being convinced to help fix the roof...Mother was cleaning or cooking...i cant remember perfectly, because Mark had been interrupting me----
the next thing i know, Mark is coming out of the kitchen with a bottle of champagne and says, ''let's have a drink." i yelled at him and said that he doesn't listen- i had a stomach ache!!!
He poured two glasses anyway and stood in front of me.
----Jim Anderson had by this time come home, Kitten had said something adorable that made her father pat the top of her pig tailed head--
I am insane with anger now...MOVE!! i am watching and i don't want a drink!!!
A lesser man would have moved...and by moved, i mean all of his belongings from the apartment and found a new girlfriend...but not my Mark...he is patient and kind....he dropped to his knees in front of me and pulled out a diamond ring, and asked me to marry him!
my stomach no longer hurt, we drank champagne and with a ring on my left hand we sat and watched the thrilling conclusion of the show!
----Mother and Kitten brought out platters of snacks for the teens on the roof...Hot dogs and doughnuts...as the platters were passed the kids all chanted "Hot dogs- doughnuts- hot dogs-doughnuts"
It was like a dream!
Posted by Ruth Kabat Thomas at 5:29 PM